I would like to wish you all a Happy New Year. I also offer my sincere wish that all members of the Japan Concrete Institute (JCI) have a wonderful year in 2018.

In recent years there has been ongoing instability in international relations, but the Japanese economy is still strong and this does not appear to be having any major impact on our daily lives in Japan. Nevertheless, there are various complex political developments in Japan, with comparatively significant changes in alignments.

In the construction industry, there is revitalization in the concerned areas including those in which restoration from the Great East Japan Earthquake and preparations for the Tokyo 2020 Olympics and Paralympics in three years' time are ongoing. However, there is stagnation in public works expenditures as a whole and, compounded by the declining birthrate and aging population, this is causing a pronounced shortfall in successors.

Meanwhile, in the world of sports the activities of the younger generation have stood out. In figure skating, gymnastics, and table tennis young athletes still in their teens have appeared one after another and taken boldly to the world stage, which is perhaps attributable to the wide scope of systems in place to foster such talent. In athletics we saw the first ever Japanese completed the 100 meters in less than 10 seconds. Also in the world of Shogi a junior high school prodigy made his appearance on the professional stage.

I feel that it is necessary to renew our efforts to instill interest in activities and deliverables in the engineering and concrete fields which, despite their close proximity to the daily lives of the general populace, are not known. This is a fact perhaps attributable to a lack of equivalents to the spectacular stages such as those found in the world of sports. While discrete efforts are being made, such as visiting lectures and the holding of a full range of events, there is a need for unified and sustained activities.

The JCI is also deploying a variety of initiatives based on these challenges. One example of a new initiative, a research subsidies system to fund the research activities of the younger generation, was launched in the last fiscal year. Your gracious cooperation has ensured that this has been extremely well-received, and there have been many applications for research funding. This has continued into the current fiscal year. Funding is also available for presentations at international conferences, and we can thus also anticipate this facilitating the active involvement of the younger generation.

The Committee on Promoting Women's Participation and Advancement in the Concrete Field is a committee to consider strategies to further the cause of women's activities in the concrete field, which are currently deficient compared to other fields in the global and domestic situations. Specific proposals continue to come together. Along with proposals of The Committee on Public Relations Strategy for Image Improvement of Concrete, it is my hope that specific action plans will coalesce and be implemented.

Examples of international activities include the hosting of the JCI-RILEM International Workshop on "Control of Cracking of Mass Concrete and Related Issues Concerning Early Age Cracking of Concrete Structures," which was held last year in April in Tokyo, and the Plenary Meeting of ISO/TC71 held in September in Sapporo. We also held the ACI-JCI joint seminar in Anaheim, California in the U.S. in October. Thanks to the efforts of all JCI members, each of these ended in success, and our initial objectives were achieved. I hope to continue to further such international activities going forward.

Artificial intelligence (AI) is now a talking point in many societal spheres. In the worlds of Go and Shogi AI is making a point of vanquishing past masters and changing the established status quo. Further, robots equipped with AI are gaining traction and making inroads in fields ranging from household luxuries to company receptions and store check-out terminals.

In the construction industry too, new movements are getting underway, with the keywords of i-Construction, improved productivity and securing hands. However, for the concrete field, with the exception of a review of precast concrete from the perspective of improving productivity, no new initiatives are noticeable.

In Europe and the U.S. research has begun on construction of concrete structures using 3-D printing procedures. This is a method of layering concrete without using form works, akin to making a large cake. As it stands, there remain challenges to be solved encompassing materials, execution and design. However new leaps forward in concrete engineering presumed on AI can also be anticipated. I also hope that investigations and research will be instigated at the JCI.

Finally, allow me to entreat your kind and ongoing understanding and support in actively taking on new projects to engage with these challenges in the coming year. 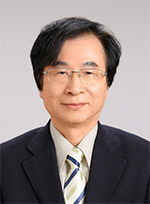